There are many things that we have nowadays that we did not always have available to us. Things like phones, motor vehicles, laptops, and other items that make life more convenient. But one thing that people did have back in ancient Egypt and Babylon, were locks and keys. Locks were used for the same reason they are today, to keep possessions and goods safe from thieves.

The first locks were wooden with large wooden keys. According to History Cooperative, this early lock and key method was adopted by ancient Greece, Rome, China, and more. Wealthy Romans would use locks and wear the key as a ring, keeping it close and showing status.

Then the metal locks started showing up. In about 900 AD, the first metal locks were made of iron or brass and soon spread through Europe. Between the 14th and 17th centuries, locksmithing had become a profession and they were beginning to get crafty with their metal work. Locksmiths would work on locks and keys with special and beautiful designs for nobility. These intricate locks were often designed to resemble royal symbols and crests. 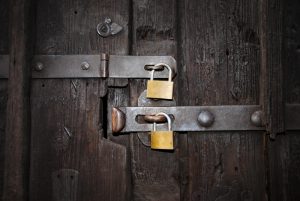 In the 18th century, locksmiths began making more locks and keys that were more durable and secure, improving the technology right along with the aesthetics. It was during the industrial revolution, when locks and keys finally saw improved complexity.

Robert Barron perfected the lever tumbler lock, this was a sophisticated lock that was more secure and was better at keeping intruders out. This type of lock requires the lever to be lifted to a specific height, not too high and not too low. This lock structure is still used today.

In 1817 Jeremiah Chubb designed a lock that was difficult to pick and would actually show signs that it had been tampered with. Chubb and his brother started a locksmithing business and designed locks that were even better. They invented the lock that used six levers rather than four. They also created the disc that went around the keyhole to keep pickers from seeing the levers inside.

Another few lock designs were created and used and in 1848, Linus Yale created the modern version of the double-acting tumbler lock that we still use today. This design used different length pins, which will stop locks from opening without the correct key.

While locks have improved majorly throughout the centuries, locksmiths will never be out of a job. Many locksmiths work their own business, doing residential and car locksmith tasks. They have the ability to fix our locks, make us new keys, and unlock our homes and cars if we ever get locked out. Many people take locksmiths for granted, until we need them. Luckily, you will always be able to find the help you need. At 24/7 Emergency Locksmith, we can help you with your car and home lock issues. Contact us today, we will be there to help!