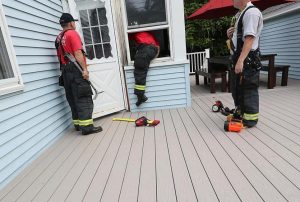 Firefighters, EMS, and other first responders are some of the most respected and brave members of our society. They work any and all hours of the day and night and put themselves in harm’s way to protect those in their community.

That’s why it was so special to us to see this recent article detailing how locksmiths in one local community came together at the behest of its first responders to help in a time of need.

“Amid the fire trucks, police cruisers, and gas service vehicles, they pulled up Friday in two red vans. One labeled Patriots Lock, the other Brinks Lock.

They are locksmiths, what they called a dying breed.

As emergency responders went door to door Friday to make sure gas lines inside homes were shut off after the Thursday afternoon explosions that rocked the area, locksmiths’ services were in high demand.

“It’s the safety of the community,” he said, wiping sweat from his brow.

Ed Fenby, deputy fire chief in Quincy, said gas company representatives got into most of the houses Thursday night, but they were double checking on Friday for safety reasons. He estimated that they will have to check 8,000 homes.

“”Wer’e still going to have to make sure there is no gas, safety is the key,” he said. “The gas company is looking at all the meters.”

After the number of fires and explosions that rocked the area, he said, “they want to preclude that from happening again.”
In only a matter of hours, Colonna and his brother David MacEachern, who owns Patriots Lock, had picked dozens of locks to empty homes. And they expect they will have to pick countless more, as authorities work through a broad swath of houses to confirm that gas lines had been shut off.

“This is nothing I’ve ever seen before; it’s chaos,” said MacEachern, who recalled picking locks in Lexington for a week in 2005 after a gas explosion at one structure.” SOURCE: BostonGlobe.com

Here’s to first responders and also to those who understand the value of community. We’re proud of you!