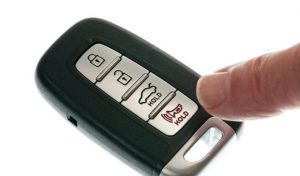 More and more people open their cars with a key fob via keyless lock entry. It’s almost second nature at this point. Think about it, when is the last time you’ve physically opened your car door with a car key?

For some, it may still be the way that they do get into their vehicles, however, for many it’s a thing of the past.

And while that ease of use makes your life a bit less hectic, it has also created a situation where thieves have begun using the same technology to get inside your car. By using relay amplifiers, some thieves are able to “hack” into your key fob and then use that signal to get into your car.

And while this isn’t a widely reported problem in the Lehigh Valley, it is still something that car owners should be aware of and should at least know how to prevent against.

Here are some tips to prevent car break-ins or theft via keyless thieves:

Key Your Key Fob behind metal

Thieves can’t use their fancy amplifiers effectively if your key fob is hidden behind something metal or inside something like a microwave. Get creative!

Park in a garage

Sure, this is obvious, but if they can’t get at the car, it doesn’t matter what they are using to try to break into it.

Remember The Club? There is still something to be said for “old-school” theft deterrent methods.

Using home security systems with cameras is a great way to deter thieves who are attempting to get at signal from your key fob.

Again, while this isn’t a widely reported Lehigh Valley phenomenon just yet, we want to be sure that you are aware of it and know how to guard against it!