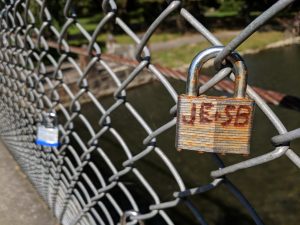 You don’t have to go to France to see an example of love locks adorning a bridge. The Monocacy Park Bridge, located off of Illicks Mill Road, has attracted its own collection of locks in the last few years, which are meant to represent a couple’s love.

According to Wikipedia, the history of love padlocks dates back at least 100 years to a melancholic Serbian tale of World War I. A local schoolmistress named Nada, who was from Vrnjačka Banja, fell in love with a Serbian officer named Relja. After they committed to each other Relja went to war in Greece where he fell in love with a local woman from Corfu. As a consequence, Relja and Nada broke off their engagement. Nada never recovered from that devastating blow, and after some time she died due to heartbreak from her unfortunate love.

As young women from Vrnjačka Banja wanted to protect their own loves, they started writing down their names, with the names of their loved ones, on padlocks and affixing them to the railings of the bridge where Nada and Relja used to meet.

While the romantic locks are interesting to look at and represent something near and dear to many, there have been instances where locks on bridges around the world have had to be removed by city governments over concern for structural integrity or aesthetic appeal.

There don’t seem to be enough locks on the Monocacy Park Bridge for the city to get involved just yet, but since the bridge is so small, it would be expected as more and more are hung onto it.

So, if you’d like to see love locks in the Lehigh Valley, be sure to visit Monocacy Park before they are gone!

Take a look at some pictures of the love locks below.